Introduction to Waveform Generator Technology
Traditional function and arbitrary waveform generators have for many years been built on one common technology – DDS or Direct Digital Synthesis. DDS allows an instrument to create waveforms by tracking the phase of a reference clock and outputting the closest sample to the desired signal at each output sample time. DDS has enabled quality performance at a reasonable price for generations of function generators.
Today, new technologies are emerging that enable instruments to utilise both the advantages of DDS while improving signal fidelity and usability in more applications than ever before. Technologies like Keysight’s improving signal fidelity in waveform generators. SiFi technology was created for Rigol’s latest arbitrary waveform generator family, the DG1000Z series. These instruments combine the true point to point waveform generation of arbitrary signals and redesigned output hardware to create arbitrary waveforms with flexibility and accuracy not available a few years ago. Combine this with the available deep memory and SiFi technology enables emulation of precise arbitrary signals over longer periods without losing fidelity.

Understanding DDS or Direct Digital Synthesis
The DDS method uses phase to determine the correct output over time. Let’s look at an example. Assume we have an 8192 point arb that we want to play back at 6.25 kHz. We load an arbitrary waveform made up of 400 cycles of a Sine wave. Therefore, we should have a fundamental frequency of 2.5MHz. The DDS generator assigns a phase value to each point in the wave. The first point is 0 degrees. Each point after that add an increment of 360 degrees/8192 allowing for all the points to be played in a period and the first point to be up again when it returns to 0 degrees. That increment is approximately 0.044 degrees. Driven by the clock source (often a PLL) the instrument essentially measures its phase from start every 5 ns (the instrument has a 200 MSa/sec update rate – or once every 5 nsec) and chooses the closest phase value to select from the arb table. In this example, each 5 ns represents 360 degrees/ (160 us / 5 ns) = 0.01125 degrees. Therefore, the arbitrary waveform looks like figure 1 in the UltraStation software and then the actual output values that are selected over MHz fundamental frequencies are shown in figure 2.
What is worth noting about the output is that even though we are able to output samples much faster than is required we have created some distortion. Namely, some of the points in the arb, which are all evenly spaced, are repeated for 10 ns and some will be repeated for 15 ns. The lack of smooth, continuous changes created by the file’s quantisation of the sine wave causes this distortion. The distortion is increased significantly when the playback period is adjusted slightly because the DDS algorithm is forced to make tougher decisions about which point to output since the ideal output is now further from the available points which were chosen for the initial playback period. This is critical because it is the careful sampling to generate the correct, high fidelity arbitrary signal which is the time consuming and difficult task. Using DDS, engineers who want high fidelity signals must go back and resample, recreate, and reload an arbitrary waveform whenever they want to tweak the playback period. DDS forces engineers to choose between convenient and efficient signal generation or high fidelity and accuracy during playback. 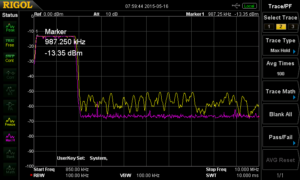 SiFi technology overcomes this basic effect on signal integrity with a new architectural approach. Let’s take the same signal and example and test it in SiFi mode. Here we load the same arbitrary wave. We simply set the output sample rate to be 8192 points * 6.125 kHz = 51.2 MSa/sec. Now, after changing that one setting we investigate the output of the signal with a spectrum analyser. The data is overlaid with the DDS mode data in Figure 3. To create this spectrum we used Max Hold on each trace while we changed the playback frequency for DDS and the output sample rate for SiFi to create fundamental frequencies between 1 and 2.5MHz. As we adjust the playback parameters in real time, DDS mode creates signal distortion at various frequencies across the 2-10 MHz band shown in yellow. Using the same exact arbitrary waveform a simple switch to SiFi mode creates much more even waveforms with significantly higher signal fidelity shown in purple.
This is a simple example of the difference between the 2 architectures, but even advanced users may be unaware of the trade-offs they are making with a traditional signal generator. Most users would assume that a 30 or 60 MHz arbitrary generator is capable of a nearly perfect 1 MHz sine wave. It all depends on the importance of signal fidelity to the application at hand. After all, many engineers look at output sample rate as a key specification but it doesn’t tell the whole story. In the example we just did, the DDS wave was being output at 200 MSa/sec while the SiFi wave was being output at about 50 MSa/sec. Still, the SiFi wave produced a much cleaner signal. The more complex the arbitrary waveform the more difficult it becomes to understand the impact of the sampling technology. Artefacts from this resampling can have profound impact on the frequency content of a true arbitrary wave and there is no way to easily separate the real wave from the sampling artefacts. This also means that buying a DDS waveform generator with a higher output sample rate invariably alters the frequency components of the signal even when playing the same arbitrary file. With SiFi technology this is not case.
Signal fidelity is critical to design engineers using waveform generators in their testing. Using a generator with SiFi technology improves the accuracy of waveforms you reproduce by allowing the engineer maximum flexibility in setting the output rate of their arbitrary waveform. 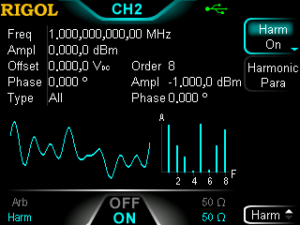 Enabling more functions and waveform types
Improved signal fidelity is great, but signal quality alone doesn’t make a great technology or a great instrument. Alongside Rigol’s SiFi technology is the capability to create more unique waveform types without having to build custom arbitrary waves. This includes the unique ability to build harmonic waves on the instrument front panel where the engineer describes the phase and amplitude of each harmonic element of the starting frequency. Figure 4 shows how an engineer can define a harmonic wave from the instrument’s front panel. Harmonic waves let the engineer set amplitude and phase values for the fundamental frequency up through the 8th harmonic. Traditionally, engineers who need signals which are more easily defined in RF space would have to define each frequency, amplitude, and phase and sum them together into an arbitrary wave. To create the wave in RF space the user would then have to resample the output in time domain with the correct sample spacing. This is a cumbersome way to generate and work with arbitrary waves. Harmonic waves are much easier to create. Simply define the power and phase at each frequency at a multiple of the fundamental and the instrument automatically combines them and plays them back. Figure 5 shows the matching spectrum to the signal defined in figure 4. Figure 6 is the same wave captured on a scope. This is the time domain arbitrary data a user would have to create, load, and configure on a traditional generator to get the same signal they can now quickly build from the front panel. With these new capabilities empowered by SiFi technology, the Rigol DG1000Z series waveform generators add significant power and flexibility to the engineer’s bench. 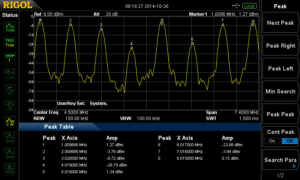 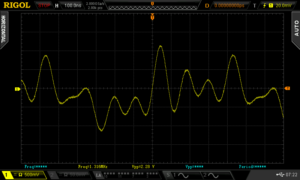 Developing Powerful and Flexible Deep Memory Arbitrary Waveforms
The key technological advance of SiFi is the ability to deliver true point to point arbitrary waves. Without this capability arbitrary waves become notoriously difficult to generate accurately and require additional behind the scenes work by engineers slightly adjusting sampling and points to improve the overall signal fidelity. This task becomes considerably more difficult when using deep memory arbs that contain millions of points. With SiFi technology, engineers can create longer, more precise arbitrary waveforms. In the adjustable sample rate mode users can define a signal that will be output at up to 60 MSa/sec. With up to 16 Million points of memory depth, it is then possible to create completely custom point to point waveforms up to 250 milliseconds in length while still maintaining the full output sample rate. The traditional difficulty with working with such long waveforms is they are a challenge to edit. For instance, Microsoft Excel 2013 only allows just over 1 million rows of data. Using a DDS generator, to make a slight change to the playback period you need to either resample the wave or deal with artefacts created by the DDS phase based sample selections. With SiFi technology, you can leave the precise waveform as sampled and simply adjust the output sample rate. This saves the considerable time and effort of editing and reloading long waveforms to the instrument.
While SiFi makes arbitrary waves easier to manipulate and more flexible once they are created, users still need a reliable method of generating, editing, and loading long waveforms to their instrument the first time. SiFi enabled generators come with free UltraStation software for waveform editing. This tool enables importing, combining, and freehand editing of deep memory waves. Waveforms can then be loaded directly to the instrument over LXI or USB. In addition to the time domain, the editing software has a spectrum view to see the power and phase of the signal you created as shown in Figure 7. The combination of deep memory, SiFi technology, and enabling editing software empowers engineers to reproduce more flexible, more precise waveforms than traditional DDS technology alone. 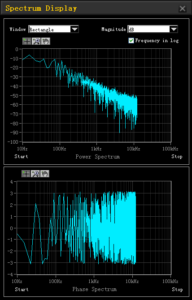 Unprecedented Value
Rigol’s SiFi technology and the DG1000Z series waveform generators allow engineers to cover more signal reproduction applications than ever before with improved signal fidelity, flexibility, and ease of use. The deep memory capabilities and hardware design of the instruments work together with SiFi sampling technology to make these improvements possible and deliver unprecedented value to the engineer’s bench.