PCR-LE/LE2 Series can produce a DC output that enables you to test DC-powered devices such as DC-input converters. This article introduces the important precautions and useful functions to effectively operate PCR-LE/LE2 Series in DC mode.
1. Circuit Model
See Figure 1 for the test circuit model with PCR-LE. It illustrates the DC-input converter/inverter that has a capacitor-input circuit but without an inrush current prevention circuit. 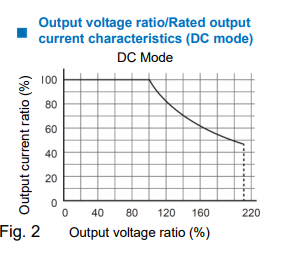 3. Inrush Current
The rise time of PCR-LE is less than approx. 80μs in any response setting. While large inrush current would flow to the model circuit shown in Figure 1, PCR-LE equipped the current limit circuit can hold the DC current level to the maximum instantaneous current. If the RMS DC current exceeds the limit for 1 second or more, the overload alarm is triggered to shut off the current. The alarm can be cancelled by pressing the ALARM CLR key.
To prevent such inrush current, the power supply capacity should be increased. In PCR-LE, you just turn Soft Start on to raise the output voltage gradually and limit the current through the capacitor. To set Soft Start, press OTHERS (SHIFT + MEMORY) > RISETIME (F1).

4. Impedance when output is off
When an output is turned off, PCR-LE has a high impedance as shown in Table 2 (approx. several kΩ to several tens kΩ). As shown in Figure 4, the voltage reaches 0V for approx. 200μs when the output is turned off, and then PCR-LE is in a high impedance state. During this 200μs, the capacitor in Figure 1 discharges its electric charge and the OCP activates to shut off the current.
Table 2: Impedance when output is off

If you have any trouble during this 200μs, it is recommended that you insert a diode in series for the PCR-LE output or set COFIG > Surge Suppression > OFF to leave the high impedance (Voltage does not reach 0V). To set surge suppression, press CONFIG (SHIFT + OPR MODE) > 1/2 (F6) > SURGE S (F2) > OFF (F/W Ver.4.50 or later).
5. Others
PCR-LE uses a high-speed amplifier. The output may become unstable due to capacitive loads or wiring conditions. With such loads, we recommend that you change the response setting to SLOW to keep stable operations.
To set the response, press OTHERS (SHIFT + MEMORY) > 1/3 > RESP.