PLZ Series: How to Effectively Improve Safety during Load Testing of Non-isolated AC/DC Converter
Considering minimising the potential shock hazard, the use of an isolation transformer or regulated power supply is critical during load testing of a non-isolated AC/DC converter (such as PFC). This white paper explains; what happens without an isolation transformer or regulated AC power supply and how important these are for safety reasons.
1. What happens if non-isolated AC/DC converter is directly connected to electronic load?
Figure 1: Since the DUT is non-isolated, the capacitor of electronic load, which placed at its DC input, passes the current though the enclosure of electronic load to the leakage breaker, thus shutting the breaker off.

2. Preventive Action
To prevent the above interruption or shock hazard, add the isolation transformer or AC regulated power supply as shown in Figure 3, which can provide the electrical isolation between the utility power line and the primary and secondary terminals of DUT. This can greatly reduce the potential shock hazard for an operator. 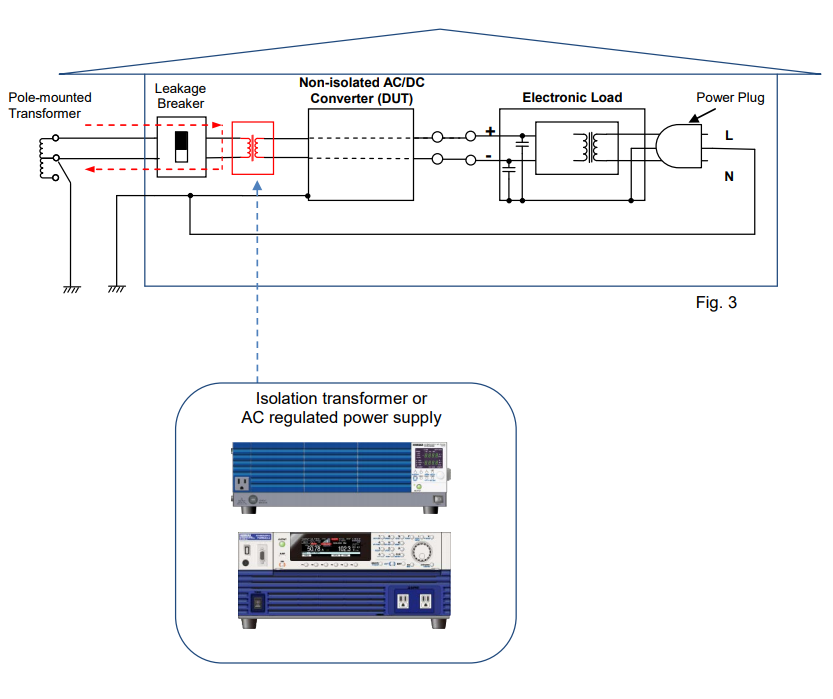 3. Non-isolated DC/AC Converter Testing
The same situation may occur while performing a load testing on a non-isolated DC/AC converter (such as power conditioner) by using our AC electronic load PCZ1000A. In this case also, we highly recommend to use an isolation transformer or regulated power supply.